Microsoft & Salesforce.com – The 800-Pound Gorilla vs. the Elephant in the Room

The photo with this post was from a short-lived marriage that I called the “Can’t we all just get along” phase in the Microsoft/Salesforce relationship. This love fest came to an abrupt end when Microsoft acquired LinkedIn, in spite of vehement efforts by Salesforce to block it, leading to irreconcilable differences and a hasty divorce. Since then the two behemoths have been circling and sizing each other up in the ring.

In the cloud business applications space, Salesforce.com is sitting somewhere around a 20% market share, Microsoft sits around 4%. You have to wonder why Microsoft came up as a subject so many times at Salesforce’s just concluded Dreamforce conference. You might think that it would be better if Salesforce co-CEOs Benioff and Block, just ignored Microsoft and continued to marginalize their efforts. But Microsoft is not “Joe’s Software Company”, they’re freaking Microsoft! In the grander landscape, according the Forbes list of the worlds largest companies, Microsoft is #20, and Salesforce comes in at #856! Even if you have a 5x larger share of a particular area, you simply can’t dismiss a competitor who is almost 43 times your size. If Salesforce is the 800-pound Gorilla in Business Applications, Microsoft is the 34,000-pound Elephant who is starting to pluck bananas off their tree. So who is the David, and who is the Goliath here?

Before Satya Nadella took over the helm at Microsoft, Salesforce really didn’t have much to worry about. Nadella’s predecessor was more interested in buying things like mobile phone companies, and the Dynamics business group was just one of many things in the stable. While it is true that Balmer sparked the charge to the cloud for Microsoft, it was Nadella who poured the gas on the fire. Guess what? Nadella was previously a Business Applications guy! Uhoh. Since the day Nadella took over, Dynamics started becoming a part of the conversation at Microsoft. He replaced the boobs that were running Dynamics with a proven leader, James Phillips. Today, Dynamics 365, and the more recent “Power Platform”, is part of every conversation that Microsoft has with customers.

Sure, Salesforce can crow today. I too am number 1. I am the world’s most successful, and most read, blogger… “who is named Steve Mordue”. Salesforce’s worst nightmare is Microsoft actually focusing on their space. Remember Lotus 123, or Word Perfect, they too were number one, until Microsoft decided they wanted to be there. Salesforce has stepped up the rhetoric lately, particular at their DreamForce conference with slides like this one presented to investors: 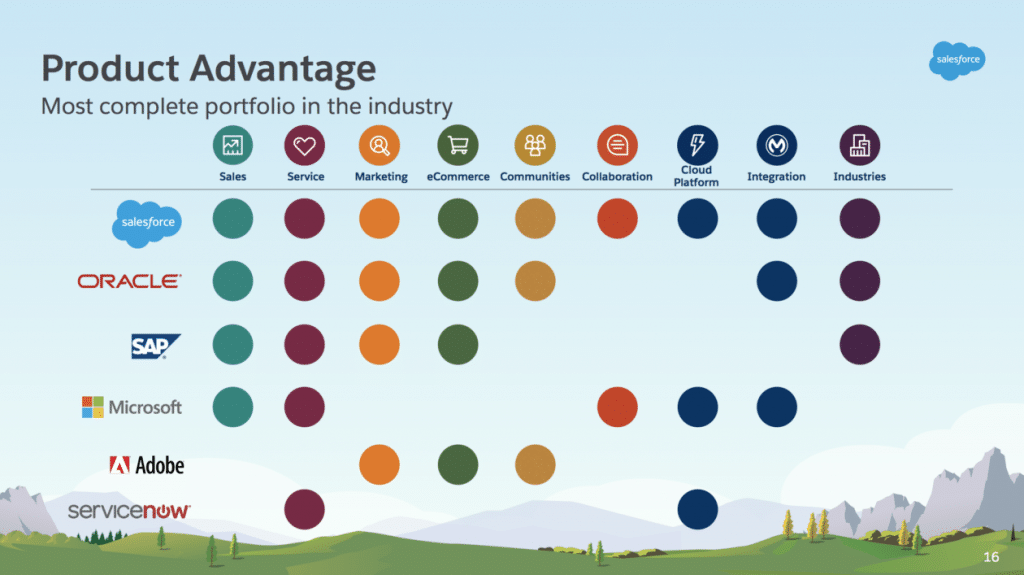 An interesting claim… “Most complete portfolio in the industry”. It’s looks to me, like in addition to ignoring Microsoft Dynamics 365 for Marketing, and Microsoft’s Industry focus, they also conveniently left off a few dozen columns.

We’ve seen this before

Amazon (Forbes #53) also landed in Nadella’s crosshairs, and based on all of the trajectories I have seen, it looks like Microsoft may overtake them in the not too distant future. Salesforce has reason to be concerned. If #20 can cause so much disruption for #53, imagine what they could do to #856! And now the turret is swiveling around towards them. There is seldom a public comment made by Nadella today, that does not have Business Applications mentioned within it.

While Nadella has elevated Microsoft Business Applications in the grand scheme, the people that Salesforce needs to be the most worried about, are actually James Phillips and Alysa Taylor. These are the two snipers on the hill overlooking the Salesforce camp, and Nadella has authorized unlimited rounds for their rifles. After he took over and got the Azure pathway cleared, Nadella turned to Business Applications. As I said above, one of the first things he did was get rid of bumbling leadership, and install these snipers. Phillips has methodically cleared out all of the Keystone Cops under the prior regime, many of which are now at Salesforce. It is kind of ironic that Salesforce eagerly snapped up, and put into leadership positions, many of the people that Phillips determined were “not good enough”. Phillips inherited a losing hand, but instead of playing it out, he just threw the cards away.

Let’s face it, before the Nadella/Phillips/Taylor focus, Salesforce had little to be concerned about from Dynamics. It was more like a fly that occasionally needed swatting. The Dynamics BG looked a little schizophrenic, a bunch of random smoldering piles seemingly lit by tossing matches willy-nilly in hopes of something catching fire. Phillips and Taylor poured water on a bunch of these, and then strategically injected gas onto others. In addition, with a specific plan in hand, they lit whole new fires, and have been methodically concentrating all of this raging flame into a blowtorch aimed directly at Salesforce. Based on Salesforce’s reactions, they clearly feel the heat.

One of the segments of the Business Applications market that Salesforce should also worry about, is the on-premise market. Obviously they understand the opportunity, hence their acquisition of Mulesoft. But when you look across the on-premise market for I.T. all up, Microsoft is the far and away dominant player. Where Salesforce has Cloud Business Applications loyalty, Microsoft has decades long loyalty in the on-premises business. Microsoft continues to shift this legacy cache of on-premise customers into their cloud, led by Azure and Office 365. There are also a significant number of legacy Dynamics deployments in many of these on-premise troves. Probably not enough to eclipse Salesforce’s 20% market share alone, but they will make a significant dent. In almost every one of these cases, Microsoft is in competition with their own legacy, Salesforce is not even in the mix.

Keeping up with the Joneses

Facing the market leader, Microsoft has spent a lot of time “catching up” to Salesforce. But we are seeing a shift to tit-for-tat. Einstein was in direct response to Azure AI by Salesforce. Microsoft Learn is a direct response to Salesforce’s Trailhead. Salesforce’s “Flow” is a direct reaction to Microsoft’s leading the charge for “Citizen Developers”. Both companies are looking for opportunities to launch the “next big thing”, but given the huge palette that Microsoft has to work with, they could soon be the ones that Salesforce spends all of their effort catching up to.

Steve Mordue, a Microsoft Business Applications MVP, is the CEO of Forceworks, a 2014 Microsoft Partner of the Year. Steve started his business applications consulting career in 2001, originally supporting Salesforce.com as a Certified Consultant. Steve transitioned his consulting practice to Dynamics CRM, (now Dynamics 365) in 2011. Steve has been engaged in hundreds of deployments over the course of his career. As one of the leading Microsoft Business Application Consultants, recognized by Microsoft as an expert, Steve has provided training, on behalf of Microsoft, to other Microsoft Partners globally on how to launch and build successful practices. Steve is a member of the Worldwide Dynamics Partner Advisory Council, and is a frequent presenter and panelist at global Microsoft events. The opinions shared in this blog are Steve's alone. If you are looking for Microsoft confidential information, you will not find any here.

Add your 2 cents, but don't use my comments to pimp your stuff! Cancel reply